A fleet of three self-driving vehicles began operating in Pasila, Helsinki on April 14 2020, supported by an on-demand mobile app and a Remote Control Centre (RCC) for autonomous vehicles. A large new shopping centre “Mall of Tripla” was recently opened in Pasila, and it also serves as a mobility hub, connecting train station, bus terminal, bike parking and tram stops. The number of passengers changing transport modes at the mobility hub is projected to reach 100 000 users per day by 2035. These developments were considered when Pasila was chosen as the pilot site for testing robot buses as part of urban public transportation systems.

The vehicles in the FABULOS project drive along a circular route in Eastern Pasila, going from the Pasila station next to the Mall of Tripla, then turning north to circle back to Messukeskus Fair centre. The Pasila route runs around a large block consisting of offices and housing, together with several public services and authorities. The robot buses will ride partly on a separate lane with speeds of up to 40 km/h. The route includes several crossroads with traffic lights, right turns, street side parking and a roundabout. There will be three bus stops on the route (Pasila station, Messukeskus Fair center and Asemanpäällikönkatu street). On-demand rides between the existing bus stops will be done via the Shotl App and service. The fleet of three vehicles will be operated and monitored from a Remote Control Centre (RCC).

The companies in charge of the pilot operations are Sensible4 and Shotl. Sensible 4 is a Finnish software company, focused on all weather autonomous driving. Demand-based transportation is tested with an application created by the Spanish company Shotl. The pilot is scheduled to continue until June 30, and it will have at least 50 operational driving days, validating both the technology and compliance with the public transport systems.

Due to the Covid-19 situation, passengers were allowed onboard from 9 June onwards. To view the R29 robot bus line timetables and information on demand based transportation, please follow this link. 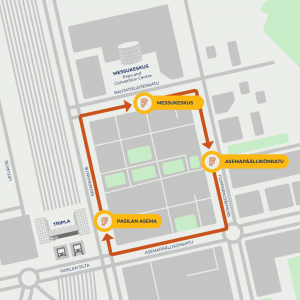 GACHA robot bus to be tested during the pilot

Autonomous shuttle bus GACHA – designed by MUJI – is one of the three autonomous vehicles driving in Pasila. The technical specifications are as follows: 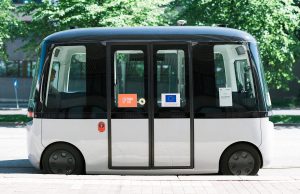 Autonomous drive technology of Sensible 4’s robot bus is mainly based on laser scanners and visible light cameras. Point cloud produced by Lidar is generalized into three dimensional description of the world in a way that effectively reduces noise from snow and falling leafs. This way of handling the sensor data is unique to Sensible 4. Laser scanned data combined to camera picture is used for obstacle detection and tracking, enabling autonomous driving in all weather conditions. Especially good positioning is needed at the narrow lanes of Pasila region. Besides of the laser scanners and cameras, the Sensible 4 technology utilizes sensors like thermal imagers, high precision satellite navigation and inertial measurement units. Autonomous driving is not depending on satellite navigation.